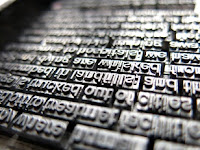 They smoked cigarettes, back then. The newsroom floor was littered with butts and the worst-kept secret in around was the fact that some reporters kept a pint of Old Turkey or some other rot-gut whiskey in the lower right hand drawer of their desks. As deadline approached, reporters sitting cheek-by-jowl could be heard screaming into phones -- yes, they said "fuck" -- in a bid to squeeze some last bit of information into a story that was rolled half-written in the manual typewriter.

In my early days -- there was no Internet and not so much as a single TV in the newsroom during the late 1960's -- someone took me out to the composing room where what was typewritten in the newsroom was transformed into hot-type lead and thence into long, narrow trays whose contents were then fed into frames that were used to print the stories as they appeared in the printed product.

My tour guide took me to a stack of long narrow trays neatly filled with column-wide chunks of type that had already gone through the press. The trays were to be emptied into a bin, then remelted and used in future stories. "You see this?" my guide asked rhetorically as he picked up one of the trays. I did see it and I knew the story it contained though I had an imperfect ability to read it all in its backward format. With great precision, my guide fingered the last paragraph of the lead that told the story. He picked it up and dropped it in the waste bin. Then he did the same with the newly-created last paragraph. And the one before that. And the one before that ... until all that was left was perhaps three paragraphs' worth of story. He looked me seriously in the eye: "THIS is how you have to learn how to write," he said of the remaining three paragraphs. No matter how complex or deserving or important -- THIS was how to write ... as if the story would be reduced to three measly paragraphs.

As a would-be writer of stories, my stomach dropped. How could anyone dismiss all that might be said on one story topic or another? How was this different from lying? But the fact was that there was only so much room in the paper and throwing stuff out was a large and wracking part of the business. Telling the truth involved creating a lie ... and it was MY responsibility.

The impact of my small tour was strong, not least because in that time, news was taken seriously. It was part of an important civic discourse. Throwing stuff away was every bit as important and challenging then as ... as including everything and the kitchen sink is today. The 24-hour news cycle had not yet evolved and news organizations made decisions about what to include and what not ... what was important and what was not. Nowadays, news organizations stuff increasingly thin and inconsequential stories with more. Fact checking, adducing evidence and a horror at sensationalizing were still in vogue. News was taken seriously.

Yesterday, longtime CBS reporter Morely Safer died at 84. If I read the obituaries correctly, he had a lifelong skepticism about what was visual (TV) and put his money on the words and argumentation and clarity. People should be encouraged and allowed to think. TV is not good at that. It prefers to parade at the truth while ducking the need to parse and dig into the truth. Safer came. Safer plied his trade in a world where, at one time, the president of the United States, would call up the president of CBS and read him the patriotic riot act because of a report (far from perfect) Safer had made from Vietnam.

But Safer's old-school reporting extended not just to serious stuff. He seemed genuinely curious about everything. Art was not off his radar screen and he could offer wry reports on all sorts of 'soft' subjects.

I'm glad to have grown up in a time when news was important ... not so much because news is important as because writing news requires -- or anyway did once -- the capacity to ask and ask and ask and ask. Find the verification for the assertion and find the verification for the verification. It used to be called critical thinking. News was important and now it is not. I cannot think of a reporter today who would be remembered as men (and women) like Morely Safer might be remembered ... people willing to make agonizing decisions about what to leave out AND to be aware that they were leaving it out and the story was less complete because of it. If that isn't a personal lesson, I don't know what is.

How much confetti anyone can stuff into a story is not the same as filling the story with relevant concrete data. Of course news stories cost money and of course it's nice if the girls have tits, but how many compromises does anyone want to make as they tell their tales?

Lying and inflation are such a dispiriting way to live ... though I'll grant you the reporters have pretty clothes and the executives are endlessly adroit at defending against broad-brush critics who wonder if the president any longer bothers to call the department of agitation and propaganda.
Posted by genkaku at 8:16 AM