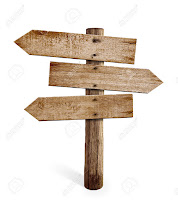 On most days, I drive my wife to her workplace so that then I can have use of the car. The distance is perhaps three or four miles through our smallish community, a generally-well-heeled place in which some people paint their houses with colors like mauve.

Between home and work, there is a route to follow. And along that route are signs to indicate one thing and another: "Stop," "crosswalk," "haircuts for $12," "no parking," and various directional indicators and routes to destinations that lie elsewhere. Today it occurred to me that there really are quite a lot of signs. What would life be like without the signs? What would it be like if they simply were not there? Would what they indicated be any less there? No signs ... one less bit of mind clutter ... one more sense of helplessness ... open space in which there were no directions given. Life without signs: Is there such a thing?

The signs of here point to a life that is there. But having arrived there, are there any fewer signs, even when the signs are uprooted and gone? A life without signs -- what might that be like?

On a Saturday night a lot of years ago, I was reading the Associated Press wire when I came across a brief that sketched out a small town in Kentucky where the governing body had voted against appropriating funds to upgrade the local library. One man explained why he had voted against the funding by saying, more or less, "I have one book on the table beside my bed. That's enough."

An ignorant man is a dangerous commodity, but is an intelligent one significantly different? In one sense, there is a chasm's worth of difference because an intelligent man sees a wider range of possibilities and from among those possibilities, there is the possibility -- but just a possibility -- to choose one that will nourish and advance his surroundings. But in another sense, don't the ignorant and the intelligent sip from a similar trough and find some contentment in discovering a resting place, a nesting place, a place on which to place his bets ... and stop ragging on one situation or another? A conclusion or an answer is so magnetic ... damn near juicier and more comforting than sex ... and the signs are everywhere, for the ignorant and intelligent alike.

But of course no-answer is pretty shoddy as well as far as answers are concerned.

Take away the signs. Is such a thing possible? And if it were, would it suffice?
Posted by genkaku at 8:11 AM