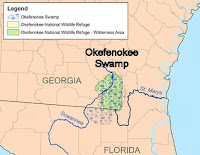 It's probably a sloppy and inept metaphor, but I toy with it anyhow -- The Okefenokee Swamp Syndrome.

The Okefenokee Swamp is a 438,000-acre wetland that straddles the Florida and Georgia borders here in the United States. And before anyone asks, yes, alligators live in its dank and channeled land mass.

Rightly or wrongly, I imagine a swampland as an arena in which no sane person would ever do his laundry and expect that anything would dry out completely. A shirt or set of blue jeans may be clean as a whistle, but always there is a lingering, inescapable dampness... just a little, perhaps, but the universe is such that dampness simply cannot be avoided or dryness achieved.

I grew up among people devoted to smarts. My father was an English professor at an Ivy League college and my mother was smarter than my father. Smart folks give birth to a smartish kid who, in due course, recognizes the aloofness that may or may not be part and parcel of the intellectual quest, even when it is just posturing. Kids just want to be loved and anything that sidetracks that longing or stands in the way of its truth is not a friend. How smart or learned anyone might be is just plain small and sometimes painful potatoes compared to the boots-on-the-ground of love.

But I grew up among smart people. And my shirts and jeans never entirely dried out. Being stupid was not really an option, though I certainly investigated. Naturally, as with other investigative efforts, there were alligators to bite my ass.

Is there any environment that doesn't linger like the dampness of a swamp? Cult members flee their cult and yet the dampness of the cult comes along. Carpenters and greed-merchants swear off the atmosphere that shaped them only to find the dampness of having been shaped.

And it's a strange function of the Okefenokee Syndrome: Some spend their lives clinging to the dampness that was visited upon them. Some try to dry out that which insists on being damp. And either way there is no escape.

As I say, a far-from-perfect metaphor. I guess I just like the word "Okefenokee."