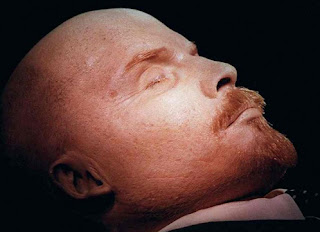 When you've got a dead body -- even if it's nothing but a replica of a dead body -- what, precisely have you got? Is it some sort of proof positive that the memory has wings and can soar? Is it some kind of P.T. Barnum money-maker? Is it adoration on the hoof? Is it a suggestion that death can somehow be cheated of its price tag? Is it a way of reaffirming the glorious government now in power ... a lineage that does not look kindly on deviations?

The 'body' of Vladimir Ulyanov (better known as Lenin) was the first dead body -- if that's what it was -- I ever saw. That was in 1968. Lenin died in 1924 and has been preserved in a perpetuity ever since. Long lines queue up outside the mausoleum where the body rests in Red Square in Moscow. I once stood in such a line and yet I still can't quite figure out ... any of it. Is history confirmed or reconfigured by such a corpse?

Does the Moscow Times article from which the above-linked Guardian article was embalmed shed more light or shadow when it reveals that the lab assuring the body's comeliness declined to comment because its work was an arena "subject to commercial and state secrets."

Snickering at the Russian effort seems not to be entirely easy: Vietnamese President Ho Chi Minh, Bulgarian leader Georgi Dimitrov, North Korean leaders Kim Il-sung and Kim Jong-il have also been customers for Soviet techniques. And Buddhists, minus Soviet assistance of course, are keen on the endurance of some long-dead monks. In what way(s) would political or religious life be diminished without these artifacts?

I guess it may all be a little like the die-hard lovers of animals: Animals and dead people are so much less mercurial than living human beings.