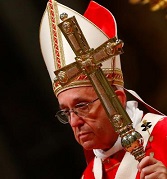 Pope Francis criticized Western powers for trying to export their own brand of democracy to countries such as Iraq and Libya without respecting indigenous political cultures, according to an interview published on Monday....

Francis has frequently attacked what he calls "cultural colonialism", in which Western countries seek to impose their values on developing ones in return for financial aid.

The pope said that "ghettoising" migrants was not only wrong but was also misguided in the fight against terrorism.