'dumb' voters in the cross hairs 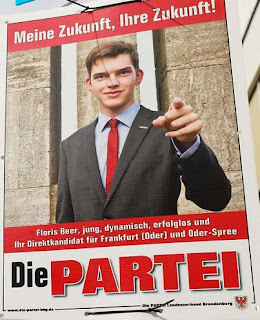 Dovetailing with my sense that North Korea's Kim Jong-un has outfoxed America's Donald Trump (both in politics and haircut) and should therefore be considered a viable 2020 presidential candidate in the U.S. comes a satirical party in a Germany that will cast its non-satirical votes on Sunday.

Die Partei has been gaining traction on internet social media. It promises to kidnap Turkey's president and vows to discard the votes of those who cannot answer simple questions. Here is an example of the sort of "simple questions" it is referring to: WHAT IS THE CAPITAL OF PARIS?


A German political party that promises to legalise drink driving, introduce cocaine on prescription and kidnap Turkey’s president is winning the social media race ahead of Germany’s federal election, an analysis of Facebook data shows.

On the one hand, I giggle and love it.

On the other hand, I honestly prefer off-kilter humor in a world so rife with confusion and half-witted responses to that confusion. I am tired of being confused. And I am tired of lies from people who don't even lie well. This is all a joke, of course, but, but ... there is something quite serious in it, I think.
Posted by genkaku at 10:10 AM