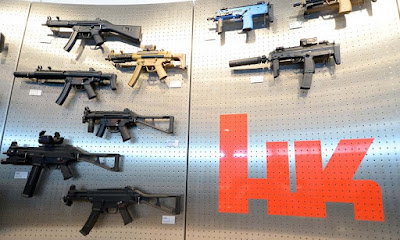 Heckler & Koch, the German weapons manufacturer whose guns are estimated to have killed more than 2 million people since the company was founded in 1949, has quietly adopted the most ethical sales policy of any gunmaker in the world.
The company has pledged no longer to sell arms into warzones or to countries that violate corruption and democracy standards, including Saudi Arabia, Israel, Egypt, the United Arab Emirates, Turkey, Malaysia, Indonesia, or any African countries.
Though never officially announced, the new strategy was included in Heckler & Koch’s latest yearly financial report, and confirmed at an annual general meeting in August.

Let me get this straight: There are "corruption and democracy standards" out there somewhere? On the other hand, if you go around shooting everyone, pretty soon there won't be anyone left to shoot.