where the shit hits the London streets 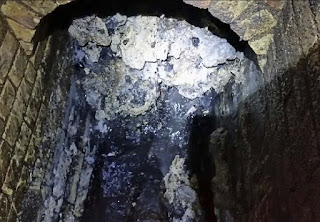 
A fatberg weighing the same as 11 double decker buses and stretching the length of two football pitches is blocking a section of London’s ageing sewage network.
The congealed mass of fat, wet wipes and nappies is one of the biggest ever found and would have risked raw sewage flooding on to the streets in Whitechapel, east London, had it not been discovered during a routine inspection earlier this month....
Thames Water must break up congealed mass of fat, wet wipes and nappies in Whitechapel sewer to prevent raw sewage flooding streets