The following appeared in the local Daily Hampshire Gazette today under the headline "Take your stand as an American." 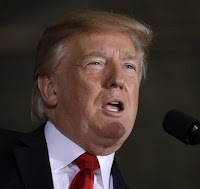 Watching the president on TV recently, I realized, not for the first time, that I distrust people who wear an American-flag lapel pin. Why would any patriot need to announce his of her allegiance unless, in fact, s/he was uncertain of what that pin professed?


I am not a patriot. I am an American.


The difference can be seen in the wake of Hurricane Harvey’s impact on flood-drenched Texas. The people extending a helping hand to those stricken by the storm are Americans. Whether they are patriots or not is irrelevant. Hungry, homeless people do not need a flag. They need help. Americans help.


On the TV, Donald Trump, the merchandiser-in-chief of America, was promising yet another program of support and rebuilding. As usual, the details were yet to come. And as usual, the rest of us would be ill-advised to hold our breath: How many other projects had details yet to come and, when they never materialized, it was not the master merchandiser’s fault? Selling is not delivering and already it is clear that those who lost their homes will be stuck with a tab Mother Nature demanded. Patriots — the ones with the lapel pins — sell. Americans deliver.


This small and somewhat snarky evaluation seemed to resonate in my mind. It echoed down other corridors in the mind. Maybe a little personal reflection wouldn’t hurt.


When was the last time a 2x4 actually measured two-inches-by-four-inches? Or, with harvest season upon us, when was the last time anyone compared a hand-picked, dribble-down-your-chin tomato with the billiard balls sold as “tomatoes” — conveniently harvested by machine — in the supermarket? Is a “tomato” a tomato because we label it a tomato?


Down the other corridors of the mind, the dead — especially military personnel — are heralded as heroes. You’ll notice that the dead do not get a say in the matter and yet because politicians and the bereaved often agree, well then, it must be true. They are heroes. But if the dead actually were heroes, every graveyard from here to Keokuk would be festooned with patriotic bunting.


Or, if supremacist race riots like the one in Charlottesville, Virginia, were actually the “wake-up call” some dubbed it, what does that say about an American history whose ethics produced the Emancipation Proclamation in 1863 and followed it up with the Jim Crow laws that walked that proclamation back ... over and over and over again. The horrified say “wake up.” History, like the bathroom mirror, says, “Get real.”


Is group-think truth-think? Look around. Is bullying in schools really eradicated by the criticism and analysis heaped upon it? Are the cruelties of religion less true for all the kindnesses it cuddles up to? Is alcoholism any less the biggest single drug addiction in America despite the opioid frenzy?


Are coal-mining jobs actually going to return in America or is this yet another obscenity — “details to come” — that amounts to toying with people’s lives? Does the Department of Homeland Security forestall a future that no one — repeat, no one — can predict even as that agency strips away privacy rights? Is there a taxpayer anywhere who will not, at some juncture, need and deserve a health care that Americans pay taxes for?


I suppose that everyone dons a lapel pin at one point or another — stands behind a cause he or she finds attractive. But isn’t there something to be said for a little reflection and a willingness to see the flaws and take responsibility for them? Just because many may agree that a lapel pin or group applause is the same as being an American, is it true?


Ethical and patriotic collectives have their uses. But ethical applause and moral foundation are not always the same thing. Anyone who looks in the bathroom mirror knows this.


Enough with the moral cowardice! Isn’t one president enough?


Never mind being a patriot, announcing what you claim to be but are unwilling to unpack.


Be an American. Take your stand, but exercise the reflection and responsibility that goes with it.


The 16th-century [a reader pointed out it was the 17th, not 16th] Frenchman Francois de La Rochefoucauld was right when he observed, “We are so accustomed to disguise ourselves to others that in the end we become disguised to ourselves.”


Adam Fisher lives in Northampton and can be reached at genkakukigen@aol.com.