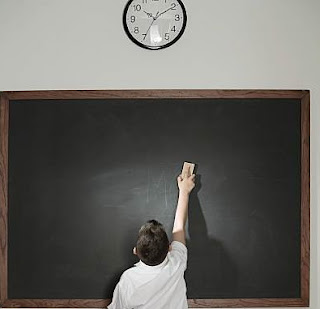 I suppose it's an old-fart's plaint, this image that came to mind this morning ... of the grade-school days when, at the end of all those academic throes, some child would be assigned to erase the huge blackboard at the front of the room. Math, English, science, geography ... all the hard work that had filled the space, been erased, been written over, been improved ... during the day would be eradicated.

The eradication might be half-baked and accomplished with erasers, which would leave behind a sheen of not-quite-clean dust ... OR ... a wet cloth might be applied and eradicate figures, letters, outlines, dust and whatever all else and take the blackboard back to a black tabula rasa. Black, black, black. Clean and new, as if it had never been used.

These days -- specifically today -- I wonder if someone might not just eradicate everything and begin again. No more Donald Trump and his ill-educated tap-dancing; no more North Korean playtime threat; no more multiple hurricanes swirling in and around the Caribbean; no more additional troops to Afghanistan; no more military equipment for police departments around the country; no more hard-luck stories of coal miners or others trying to get by; no more Democrats or Republicans; no more TED talks ...

Erase it all and begin again ... assuming I'm around and have not been likewise erased.
Posted by genkaku at 11:29 AM