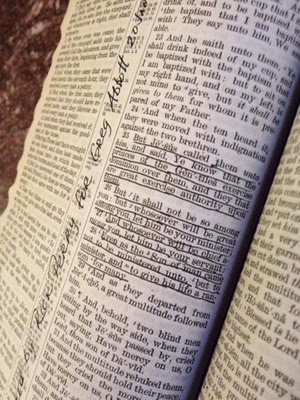 In the mausoleum that passes as a doctors' emporium today, I checked into the glass-front entry way (name, rank and serial number) and ambled over to the waiting area. Ahead of me sat an almost Bataan-thin man with a beard hunched over a book and underlining passages. I picked a vacant seat near him and looked at what he was doing as I passed him by.

Somehow, it made me smile. Then stop. Then touch him gently on the shoulder and, when he looked up, say, "I haven't seen anyone do that since I was in high school." He smiled back. "Birds of a feather," he replied. Two old farts acknowledging another time.

Underlining pivotal thoughts in any given work was drilled into us in school. For quick-reference when writing papers or trying to recall the gist of whatever fiction or non-fiction was at hand, underlining shortened the process of reminding and reminder. It became a habit I took with me to reading outside the classroom. And here, it seemed, was a kindred spirit. It made me feel good. And it brought back the wryness that occurred later when marked passages, however salient, simply missed the point on later readings.

The man whose name I never got had been to Japan at the end of WWII. He moved over a couple of seats because he was hard of hearing. He recognized my T-shirt's flag (Finland) and we agree that Finnish was a devilish language ... and he knew Japanese. In a trice, I felt a kindred spirit and was disappointed when I was called in for my doctor appointment.

But it was warming to know he was out there somewhere -- another habituated fool (?) who underlined passages in books as I no longer did. Just an instant friend.
Posted by genkaku at 6:25 PM