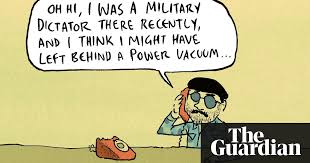 Does anyone agree: I think that if the Democrats, who claim to be keen on winning back a U.S. congressional majority in 2018 mid-term elections, actually do win ... what will happen?

I figure they'll be so busy trying to undo what the Republicans undid in the matters of climate change or bank regulation or health care or dealings with Iran that they will be the party that can be rightly accused of obstructionism and gridlock -- the very difficulties Republicans are currently trying to get out from under.

So, the Democrats will become the Republicans they claim to abhor and STILL nothing positive or nationally nurturing will be achieved.

Donald Trump has confected the perfect swamp in the swamp he said he would drain.

And I don't think the Democrats are capable of stepping out of the high-kicking, Trump-friendly, self-serving world.

Remember, undoing is miles harder than doing and no politician of any stripe wants much more than another term.

Donald Trump achieved what his minders wanted most -- a tax break for the wealthiest at the dust-in-the-eyes expense of those who actually work. Everything else is fog and cotton candy.

How anyone sees this scenario as leading to something other than blood on the risers beats the socks off of me.
Posted by genkaku at 7:50 PM