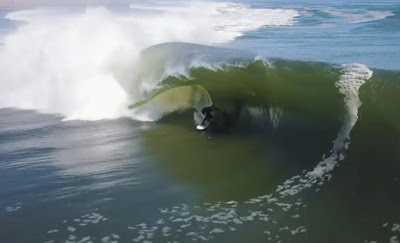 There is something a bit too picture-perfect about it all and yet I find myself delighted for the moment that Koa Smith pulled off a whopper of a surf ride. Anyone who follows whatever dream, however lonely and minuscule, to its apex ... that's wowsers in my book. In this case, the documentation appears to be there, so perhaps it's all true and I am left purring. My skepticism at the perfection of that documentation is on the back burner for now.


Perched precariously on his surfboard, the 23-year-old from Hawaii rode a wave off the coast of Namibia, on the western shore of Africa, for 120 straight seconds. He stayed upright for nearly a mile (1.5 kilometers) as he traveled through an unheard-of eight barrels — the hollow formed by the curve of the wave as it breaks over the rider’s head.

Given the Fake-News-in-Chief Donald Trump's ability to assert falsehoods and then walk them back a day or two later, I really hope Smith's accomplishment is a true accomplishment. It may be a small matter compared to the devastations of hunger or immigration or water or fires raging around the world and yet a little plus-side woo-hoo really is welcome, whatever its source.
Posted by genkaku at 8:44 AM