And, among the less-notable news items... 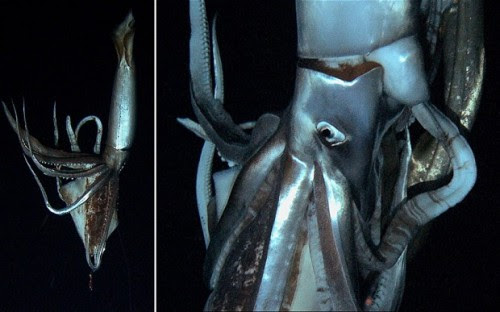 -- Japanese scientists have captured the first pictures of the giant sea squid in its natural habitat -- about one kilometer below the waves and about 620 miles south of Tokyo.

Though the pictures displayed a relative pipsqueak of the species at three meters (10 feet long), still the pictures are a first. The largest ever caught measured about 18 feet.

The giant sea squid is thought to be the basis for the myth of the "kraken," a ship-eating monster of yore.


-- In a somewhat similar sci-fi department, the U.S. government has shot down a petition from more than 34,000 Americans who urged the building of an $850 quadillion Death Star superlaser. The petitioners argued that the project would "spur job creation and strengthen defence."


The White House is obliged to respond to all petitions that gain more than 25,000 signatures.


-- In Beijing, air pollution reached levels deemed to be hazardous to human beings on Saturday.

"The air tastes of coal dust and car fumes, two of the main sources of pollution, says a BBC correspondent." Visibility was foreshortened and skyscrapers disappeared into the noxious fumes above.


Last year Chinese authorities warned the US embassy not to publish its data. But the embassy said the measurements were for the benefit of embassy personnel and were not citywide.

-- And in a smogless Las Vegas, pretty young women will strut their stuff tonight in pursuit of the Miss America title and crown.

The pageant has struggled to remain "relevant" (whatever the hell that means) in an age of so-called reality TV, but even in the pageant's heyday there was something saddening about the effort and display. Not that people in any walk of life shy from showing themselves off, it just that show-offs suggest to me that the show-off harbors an ipso-facto uncertainty ... and uncertainty is not something I would wish on anyone.
Posted by genkaku at 1:18 PM