Today I think: Maybe the whole of what is called spiritual life boils down to little more than the discovery that things don't need explanations, that explanations are a waste of perfectly good energy.

A piece of what put me on this frequency came from Charlie yesterday -- an email I will quote here as a means of not doing my own work:


Back when i was a young hippy in Arizona, Paolo Soleri began building Arcosanti down in the Verde Valley using idealists and other volunteers for labor.  I had friends in on it, got to know folks and used to go down now 'n then to play poker.  I remember Paolo grumbling once that it might be easier to make idealists out of construction workers 'cause turning idealists into construction workers wasn't workin' real well. 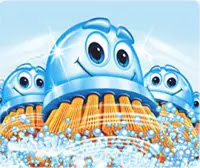 That literally made me laugh out loud. It was like the "Scrubbing Bubbles" advertised on TV that promise to keep a toilet bowl sparkling clean. Whoosh! In an instant, I was sparkling clean.

Laughter: Beyond perfect ... lacking all explanations. Explain it and you just end up with a shitty toilet bowl. Everyone can do it and yet there is an idealistic yearning to do what anyone can already do without lifting a finger.

Laughter: Explain it and you're fucked. Fail to look into its ideal particulars and you are as bereft as an idealistic hippy who has no clue about how to mix cement and has no intention of finding out. That would demean the ideal. Everyone wants the sparkly stuff and no one wants to sweat ... probably, in part, because there is some instinct that purely knows that no amount of sweat will ever attain the sparkliness of laughter.

Sparkly life. Sparkly spiritual adventure. Sparkly toilet bowl. Sparkly laughter. Washed clean in the sparkly blood of the lamb. Sparkly enlightenment. Sparkly explanation ... that loses its sparkle in the telling because there is a difference between explaining and sparkling ... or is there? I don't know.

Two days ago, I ran into a sparkly, soaring surprise that was very much akin to laughter. A friend had given me a copy of his son's book, "Babel No More," an examination of polyglots and the particulars that went into their extraordinary ability to speak many languages.

I was blown away by the first six pages. The writing was very good and the particulars sucked me in like some Norwegian whirlpool: The 19th-century Catholic cardinal, Giuseppi Mezzofanti, had been credited with being capable of conversing in 45-50 and maybe more languages. Was it true and if so, how the hell did he manage that? I was drawn into the mystery in the first six pages ... sparkly with interest and enjoyment at learning something I didn't know and was surprised by. Wowsers! Wowsers ... and yum-yum-yum.

That was two days ago. One day ago, I continued reading beyond the initial six pages and I could see where things were headed. In the first six pages, the question was delightfully posited. In the remaining 300 pages, the explanations would be sought, the facets addressed ... and the mystery, if not solved, at least depicted in its many particulars.

The writing continued to be fluid and chatty and human and ... I ran out of steam and knew, somewhat shame-facedly, that I would never finish. I didn't fault the book ... it was just that explanations, tentative or otherwise, let the air out of my tires.

Questions are enough or, more likely, too much. This recognition made me feel slightly guilty, slightly anti-social ... what the hell was the matter with me that I couldn't find compelling consequence in the explanations that a wider society might embrace and assert? It all had a slightly unfriendly feel to it and yet I didn't feel unfriendly at all. I just lacked the energy to agree with the social glue of explanations ... even when they were true and I did agree: Idealists who can't mix cement on a construction project are clearly a useless addition. That's one explanation and I find it convincing.

These days, there is a greater willingness to be what others might call stupid or uneducated or uninformed. But "willingness" overstates the case, suggesting as it does that I have some control or choice in the matter. Really, it's more like loving chocolate and hating anchovies ... it's just how things are for me. I like the sparkly surprises, clean and sharp as a hound's tooth, but the desire to grab hold or hold on or explain those surprises and that sparkle seems antithetical to their surprise and sparkle.

Stand outside a library and think about it -- a whole building dedicated to explanations ... and yet every year they add more explanations because the explanations of yesteryear don't have quite the sizzle and pop they once did. It's not something bad or idiotic -- and it's not an invitation to an assured and persuaded stupidity -- it's just the way things are with explanations.

Ah well, I am digging myself into an explanatory hole here. It's probably just an old fart returning to his idealistic roots ... I like the sparkly stuff but have run out of the delight in sweating. Isn't sparkly enough?