through thick and thin 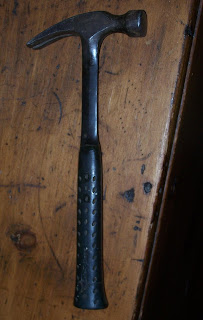 Not much lives up to its actual billing, much less exceeds it, but I imagine everyone's found a thing or two in life that does just that.

For my own purposes, I thought of two today.

One was a hammer that I have owned for over 40 years, has seen some pretty hard use and will, I like to think, outlive me.

The other was zazen, the seated meditation of Zen Buddhism. It's not something I can photograph and I can hardly claim to own it. I can't remember what it was initially billed as, but since it has been around so long, I sort of assume it has done as well, if not better, than its original advertising.

I am grateful to have found a thing or two that takes a lickin' and keeps on tickin'.
Posted by genkaku at 2:18 PM