It's a lovely day, bright and crisp.

[Insert a knowledgeable Zen-oriented observation ... maybe Ummon's "Every day is a good day."]

I asked my son to chop up some of the ice on the sidewalk since my energies are not what they once were.

[Insert Zen reference that sounds as if it might apply ... maybe "A day without work is a day without eating."]

At the supermarket, I bought spaghetti, carrots, garlic and the kind of apple pie my son is partial to.

[It may be a stretch, but "compassion" is always good for another flogging.]

It was all pretty mundane.

The apple pie is cooking ... I can smell it from here.

[Tsk, tsk! You really must get beyond perceptions!]

I wish my old pen pal Dokai Fukui were still alive. He was a Zen monk who ran a small temple in Japan and had spent time in a Chinese forced labor camp during World War II. I listen to guys like that. Dokai used to send the occasional poem -- often Zen-oriented mind-benders -- but it was just his way. He didn't make a stink about it. He was a monk, not a monk.

[Death is such a wonderful springboard for getting the lock-step in line. Have at it! "Birth and death" ... pretty profound, pretty scary, and a pretty good way of lining up pure acolytes -- people who really really are really sincere.] 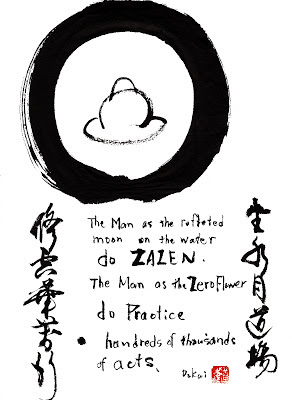 The timer for the pie just went off.

[But timers are limited, right? No reason for the rarefied man to concern himself or get tricked. Zen has an answer for that too ... and no shortage of people to give it.]