When the anguish and grief became too much, I created god.

I was a child then and longed desperately to be approved and loved and held within and without. A child who receives such gifts cannot know the desperation and sense of loss and need to be found I felt. 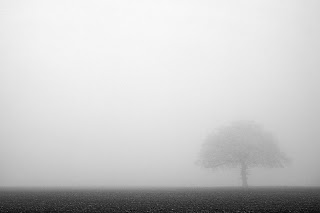 Nor was it conscious or verbal. It was more like living in an inexplicable and piercing fog that spoke without words, "you do not deserve...." And the need replied in urgent supplication, "but why!?" But the fog never replied and so I created god. A god whose kindness and caring was a mirror image of this bitter, inexplicable fog. And much like fog, the god had no dimensions or sex or actual words ... it was a god I would conjure, sometimes with success, sometimes not. It was heaven in small moments, but otherwise ... otherwise was grief-stricken and alone.

I was not deprived as a child who created a god. I had things and food and shelter. I had stuff. But I also had mounting evidence as the years passed that those who might have been the purveyors of what I longed for were not going to provide it. Over and over again ... until at last the burning brand was fixed ... the answer to my deepest prayer was "no." Heaven beckoned because the hellishness of this fog was too outlandish to be true, too painful, too unredeemed.

I created god. I hated church as any sensible child might, but I created god. What other choice was there? Where no one else will help....

My mother, to her credit, sensed that something was wrong and sent me to a shrink. During the first session, we played Monopoly, a game I liked. But when the second session came and the shrink suggested we just talk, I knew the ruse for what it was and said flatly that I would prefer to play Monopoly. If I could not trust those most likely to meet the need I had, why should I trust a stranger? I was 10 or 11 at the time.

I look back on the kid I was and the god he yearned for with tenderness. There may be scars, but the bleeding has mostly ceased. Today I live at times in abject terror that I might inflict on my kids the kind of fog that surrounded me as a child. And no doubt I have to some extent ... but that doesn't mean I won't pray my ass off to elude such a nasty, self-centered gift. Better an ax-murderer.

The god I created would come by stealth, mostly ... brief moments of relief and release and the let-go relaxation of cool pond water on a hot summer day. It was in those god-like moments that I would know, at last, if only for a moment, that I was not wrong. Sometimes I would try like the devil to conjure him/her/it up ... to pray for assistance when the fires grew especially hot ... but those prayers went largely unanswered. God seemed to slide in under some back door in my mind and appear full-blown in a bit of music or an unrequested smile or a seagull floating on the air. These were times when all the knots came undone and the unprotected openness I yearned for was no longer spurned or maligned or ignored.

It was in a wider world, of course, that I learned in bits and pieces that others had likewise suffered and created gods. When I went into the army, family members were not supportive. Everyone (if they weren't rich enough or crafty enough) had to go at that time, but sympathy and caring were, as usual, in short supply. The army, aside from anything else, was a second-class pastime, not worthy ... though, as usual, what was worthy was never spelled out. The army, for me, was a snap: All you had to do was make your bed, shine your shoes, and shoot straight in order to find a wider acceptance and even praise. What a cakewalk. Of course I didn't entirely trust my own trust. The brand had been embedded. But it was comparatively easy.

And one night, sitting in my favorite bar in the early 1960's with an army acquaintance, we proceeded to drink too much. We were gabbing along when all of a sudden the conversation turned serious. This acquaintance was a good enough guy, but hardly a close friend. Nevertheless, with his face wracked with fear and desperation, he admitted to me that he was a homosexual. I had lived in Greenwich Village and knew many of the pick-up gambits that homosexuals might use, but my suspiciousness was vaporized by the anguish in his face. We belonged to a security outfit. Homosexuality was an absolute no-no both in the military and because of the danger it posed to the secret intelligence we knew: If someone were to capture my acquaintance and threaten to out him as a homosexual, he might spill the top-secret beans. He longed to be himself and yet could not ... everywhere he turned was a fog of disapproval and rejection. In his anguish, I felt my own. I was not alone in that searing aloneness that had led to my creation of god.

The greater and more soaring the anguish, the brighter and more blissful the god. And my god, while not always available for consultation, was burnished and bright beyond belief.

I suppose nine years of fairly intensive Zen training and seven years, once a week, of shrinkery served as indicators of my gods and demons. But the happy ending I envisioned at the beginning of either or both was revised with the passage of time. By the time both became part of the past, I was grateful to them not so much for waving a shazzam-like wand ("and now everything is all better") as for banking and informing the sense of awesome and awful depths or Disney-esque wonders, twinkly as bright lights ... big and beautiful and awesome. The ouches are just as ouch. The wonders are just as wonderful ... but things are gentler and less insistent and less overwhelming ... even when they overwhelm me.

Among others, I hold a small boy in my arms and feel our shared warmth and perhaps sing a little ... something soft and enfolding and both Romantic and romantic ... something along the lines of "Por Ti Volare."

As a child, I did not weep.

I created god and lived in fog.

Now the tears are soft and warm ... sunny, you might say.

PS. A friend who found it impossible to post here, sent the following in email as a partial commentary on the above: 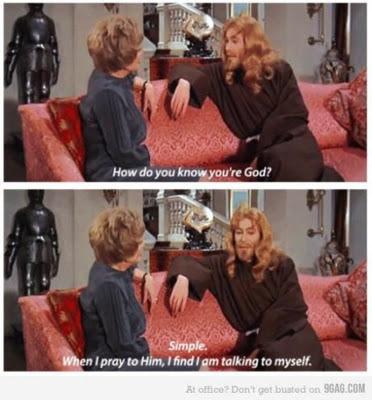