When my kids were little and one of them would arrive tearfully with a bloody nose or a painfully-scraped knee, there was something inside me that leaped up unbidden and after a brief moment of giving a kiss and a hug and some consoling words, I was off to the medicine chest.

I knew where the Band-Aids and hydrogen peroxide lived. I knew where the ice was. I knew how to wad up and wet a bit of toilet paper to stuff up a gushing nostril. I knew ... how to fix it. And if I didn't, I had a driver's license that would allow me to drive to the doctor ... and s/he would know how to fix it.

Unbidden. Without a second thought ... it was imperative in some very instinctual way to help and to ease and to make things better. It was beyond or before anything that spiritual salesmen might call "compassion." Who the hell has time for "compassion" when they are busy being (roughly speaking) compassionate? 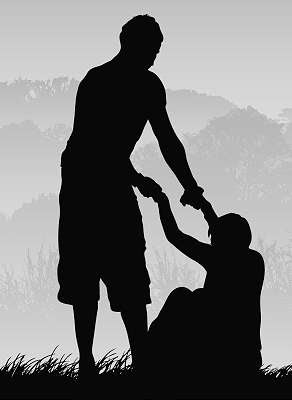 And today I realized that that same unbidden instinct or desire or whatever the heck it is, is not just limited to my kids or the people I love. It seems to pop up anywhere ... and I am not entirely sure that it is a good thing.

Today, after driving my wife to work, I turned on the car radio as I drove home. Six people in their late 20's and early 30's and with varying religious backgrounds were opening up a little about "Losing Our Religion." Christian, Muslim, Jewish backgrounds ... all were concerned with the life of the spirit and none was entirely convinced by the long-time, bricks-and-mortar formats in which their spiritual concerns were met. They weren't exactly against the institutions, but neither were they entirely for them ... and as a result, each floundered a bit as a means of creating some convincing ease in their lives.

Listening to the radio, my old, instinctual Band-Aid mentality stood up once more. How I wanted to hug these people, whisper consoling words, and kiss it better. I didn't want to sell them on some holy text book or ludicrous and yet delicious fairy tale ... somehow, I just wanted them to be happy, to return unencumbered to whatever enjoyments their lives might hold. I wanted to reassure and defend those who might feel unassured and, in part, defenseless.

The second thing that came to mind related to the recurring reference to "finding meaning" in life. Spiritual life seemed to offer some answer to the question of "meaning" for this group. What that answer might be was not clean or crisp or uniform. But despite the lack of a one-size-fits-all answer, still spiritual life offered some hinted hope ... maybe this arena of the spirit could assuage what other arenas had not.

It is so big, in fact, that calling it into question, however gently, is likely to inspire a collective bitchslap from the social gathering in which it occurs. "Everyone wants meaning! We don't ask impolite, anti-social questions!"

As it was, relatively speaking, an easy thing for the six young people on the radio to ask impolite questions of the institutions purporting to offer the answers, so I think it is easy for anyone to query the validity of someone else's near-and-dear conclusions. But it takes some serious courage to make peace with the impolite questions within ... to listen to my own answers and then pay attention to the yes-but's that whisper and nag and are often swept under some convenient carpet.

For example, perhaps, why is meaning so important? Who says so? What does it mean to find meaning? And if I found meaning, what, precisely, would I have found? If the questions I wanted answered were answered, would that honestly be the answer I was looking for?

This is uncomfortable ground. Damn near impolite. And yet without making friends with whatever questions have been swept under the carpet in the past, well, how meaningful could that be? If peace is just the absence of war, what sort of peace would that be?

Impolite ... this morning I think spiritual life positively depends on the willingness to be impolite. When all the polite answers come up empty -- when there is invariably something missing and unanswered -- what other recourse is there but to get down to the nitty-gritty and be as courageously impolite as a pissed-off grizzly bear?

Yes, of course -- be as polite and believing and hopeful for as long as it takes to realize that that won't bring home the bacon. Read the books, sing the hymns, kneel as necessary, meditate your ass off and then, when there is some recognition that all of this is as out-of-synch as a nun in whorehouse ... get impolite. No need to be impolite to anyone else ... just get impolite with all the politeness that has built up within as the days and weeks and years passed.

When did politeness -- or impoliteness either -- ever have anything to do with it?