Associating with the news:

If personal investigation shows anything, one of its bright lights is certainly this: If your wisdom is dependent on the agreement of others, it's time to investigate your wisdom. One man's wisdom is another man's idiocy and vice versa so pick your wisdom with care and caring. 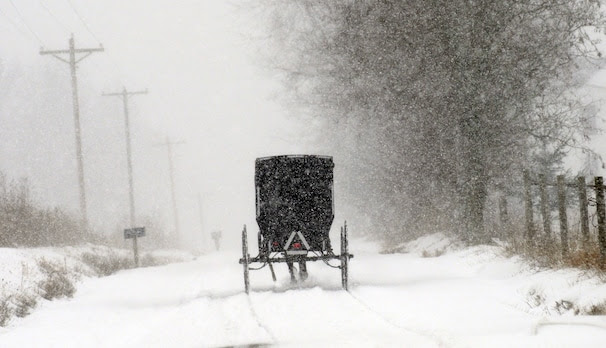 -- I had never heard of the TV show, but apparently it actually exists: "Amish Mafia," the ripe and ribald tales of a power structure within a community known for its simple and godly life. Who's screwing whom, who's got guns and who's perpetrating what self-serving agenda ... apparently it's all there. The writer of the linked article above takes umbrage at the exploitation the show employs -- as if, somehow, "you couldn't make this shit up" -- but the fact is that someone does make this shit up and people seem to watch it. And if they watch it, they probably credit some aspect of it.

It is easy to deride such exploitative idiocy from a 'wiser' place. But my thought is that people make this sort of shit up all the time. Me too. Without much investigation, books and lectures and traditions and rituals get the benefit of the doubt because ... well, because lots of other people do it or believe it or applaud it. If 'everybody says so' then if I say so, I must be 'right.' And if we're all 'right' together, well, how cozy is that?

And then the dime drops, sometimes very painfully: What everybody says or even just lots of people say is not enough ... it doesn't assure the peace I wish to assure in my own life.

But of course sometimes the dime doesn't drop at all and a whole life is spent evading the careful and caring investigation that might assure some peace. Buddhists go to their grave as "Buddhists;" Christians die as "Christians;" and the "Amish Mafia" is true-true-true.

The world is a wondrous and slimy place. Pick your wonders and slime with intimate care.

-- In the you-think-you've-got-problems department, consider the state of emergency in the Sakha Republic of northeastern Russia -- a place where the wolves are uncharacteristically attacking the reindeer herds. Bounties have been offered to thin the wolf population from an estimated 3,500 to a more acceptable 500. The financial loss to the sparsely-populated region is enormous. And it's not as if residents had a lot of other options.

-- Is it enough to trust in good luck -- the kind of good luck that others call good luck? Maybe not, but a lot of Chinese couples queued up on Friday (Jan. 4) to get married under auspicious conditions that might insure a long-lasting relationship.


The rush came because the Mandarin for 4 January 2013 sounds similar to the phrase "I will love you all my life".

Those who have been married for any length of time may smile wryly and murmur that the Chinese belief in good fortune is about as reliable as any other basis for getting married ... but even then it strains credulity a bit.
Posted by genkaku at 8:45 AM