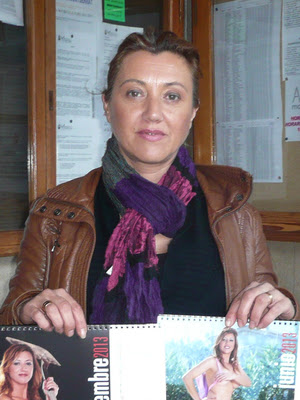 In Montserrat, Spain, economic hard times meant cutting the school-bus service that local families relied on. A dozen moms took the issue by the horns and produced a pin-up calendar that raised the money to restore the bus service.


"It's like a noose around our necks, these budget cuts," says Jose Maria Mas Garcia, the Socialist mayor of Montserrat. "We're forced to pay interest on debt rather than help our citizens."

It wasn't entirely easy for the moms:


"At first it was really embarrassing," Sancho says. "One of my photos was taken outside at the bus stop near my house — in November! It was so cold, and I was naked in the street, with my neighbors gawking."

And not everyone was happy with the solution that worked:


"What do we pay taxes for?" one man yells. "Our women shouldn't have to do this."

And in an associatively-related incident ... in Davos, Switzerland, where the world's money movers and shakers are meeting, three women ripped off their shirts and tried unsuccessfully to enter the male-dominated meeting.

P.S. Meanwhile, in Kyrgyzstan, the president has stiffened the penalty for bride kidnapping ... a longtime practice with what was formerly a three-year maximum jail term. The penalty has been raised to 10 years.


Proponents of bride-kidnapping argue that it is an integral part of nomadic Kyrgyz culture, but some academics argue that the practice has been adopted relatively recently in history.
One leading motivation is believed to be the desire to avoid the cost of onerous dowries.