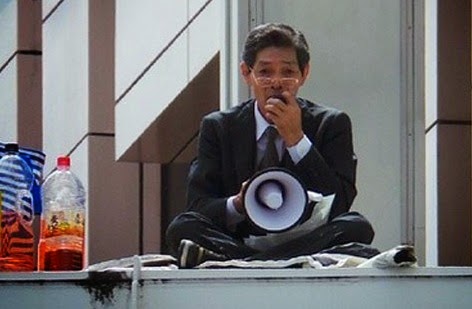 A man set himself on fire in central Tokyo (the BBC doesn't say when... today, I think) to protest a move by Prime Minister Shinzo Abe to loosen restrictions on Japan's use of military force. Severe restrictions were written into the American-imposed Japanese constitution in the wake of World War II.


Under Article 9 of its post-war pacifist constitution, Japan is blocked from the use of force to resolve conflicts except in the case of self-defence.
But Japan's Prime Minister Shinzo Abe says he wants a new interpretation of the constitution to be agreed on.

Japan has a well-trained military.

"Terrorism," while not mentioned in the story, is the go-to excuse for military action by any number of nations these days.

And, interestingly, the story says


Correspondents say the move will likely please the US, with whom Japan has a long-standing security treaty.

The man sat cross-legged, haranguing whomever would listen through a bullhorn. After an hour or so of criticizing Abe's proposal, suddenly, he was in flames.
Posted by genkaku at 9:16 AM