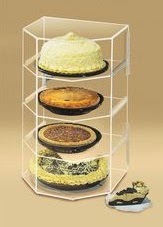 Once upon a time, along the Formica counter tops of one greasy spoon or another, there would be a  glass-like pie-display rack -- something to show off the apple and pumpkin and rhubarb and peach and lemon meringue possibilities.

Bit by bit as the day progressed, slices would be removed according to the customer's taste and the once-whole pies would begin to look like hockey-players who had lost a tooth or two while scrambling for the puck.

That's sort of the way the house feels these days. "The kids" (all in their 20's) who reclaimed their place in a realm where they grew up have filled the house in recent months. The place was chock-a-block with computer paraphernalia, shoes, exercise equipment, comings and goings, and brimming baskets waiting to get down to the washing machine or be taken upstairs for unloading.

Yesterday, my daughter Olivia and her husband Rich, once more disconnected the umbilical cord in a move to Connecticut, where Rich got a new engineering job. There was the rush to pack, the harried looks of people who didn't want to forget anything, and the removal, bit by bit, of slices of the current pie.

Simultaneously, my two sons went upstairs to reconfigure their sleeping arrangements. Who would sleep where Rich and Olivia once slept and where should personal effects be moved to? It was a domino effect of movement and mind and gadgetry.

Lingering in the midst of this dust storm was the fact that I put off a visit from Barney Marsh, a fellow I had been in the army with in the early 1960's. For all I know, we are the only two remaining from "Violet Section," a group that listened to and translated East German phone calls ... and partied in Berlin. With some time off from his job teaching economics at the University of Hawaii, Barney is touring the U.S. with his wife and wanted to stop by, but my physical condition made that seem more burden than pleasure and so I put my old friend off. It may be the last chance I ever have to see him but ... well, last times come and go, even with old friends.

And now things are quiet-ish ... fresh pies waiting for a discerning wish ... hockey players in the making.
Posted by genkaku at 7:58 AM