the superstition of reason 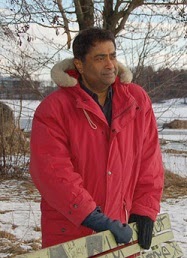 Humanists and others who delight in the realm of reason may smile smugly at the course charted by Sanal Edamaruku, an Indian living in exile in Finland after being accused of blasphemy back home. His crime? Debunking various claims and demonstrations by holy men and institutions of his native soil.

Time after time, Edamaruku has unmasked as superstition what others held near and dear -- beliefs that were strong enough so that the debunker has been threatened not just with legal proceedings, but also with death threats.

But the smile of reasonable satisfaction so rarely examines the full implications of the beliefs in question. These are beliefs that people are willing to kill others for. They are very, very, very serious about them. Blood-letting serious; freedom-taking serious. They are not as easily dismissed as the elevated intellectual mind might like.

And more than that, does the intellectual mind that pooh-poohs childish superstition take much time to examine why anyone would feel so strongly? What need is involved here? The mind of reason, after all, has the capacity to examine and investigate not only with an eye to dismissing, but also with an eye to understanding.

An article passed along in email this morning quotes Edamaruku:


I would do it again. Because any miracle which has enormous clout at one moment, is simply gone once explained. It's like a bubble. You prick it and it is finished.

It sounds very reasonable, but leaves open the question of the pain suffered by the one whose bubble has been burst. Belief is so fierce. Belief is so defining. Belief is so connecting and consoling. Do ... not... fuck...with... my ... beliefs.

The world of reason will not be denied, no should it be, for my money.

But it is interesting: The implicit and sometimes explicit promise of the world of reason is that a person of sufficient reason will be a happy (wo)man: Once you know the facts, the facts will set you free and that freedom brings contentment with it.

But is this actually so? Are facts and proofs actually enough to assure contentment and peace? Or is it more the case that fact heaped upon fact and truth heaped upon truth merely results in a variety of heaps that assure little more than heaps. This is not to disdain reason, but rather to see it for what it is -- a very good tool, but not the tool destined, ipso facto,  to assure contentment. To imagine that reason could assure such an outcome strikes me as hardly less superstitious or under-informed than the beliefs held by people who might want to kill or condemn Sanal Edamaruku.

As Swami Vivekananda once observed, "The mind [he meant intellect] is a good servant and a poor master." The observation asks the question but does not impose an answer: Who/what is the good master?
Posted by genkaku at 8:02 AM