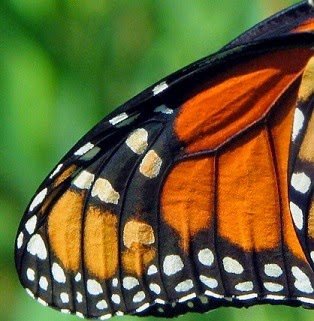 At about 6:15, what I took to be a young woman walked down the sidewalk across the street. I could see her from my perch on the porch, walking with the attentive slowness of a drug addict, a meditator or a crazy person. What caught my attention was her turquoise cap which sang cheerfully in the thick silence of the coming day.

As she passed my position, I glanced once more at her receding figure. She looked anorexic/ballet dancer thin in her uninteresting-plaid jacket and the tight jeans that accentuated her thinness. Once she had gotten past, I could see her from the rear -- the rear where the replica Monarch butterfly wings -- 18-24 inches in length -- were strapped between her shoulder blades.

I weighed calling the cops, not because she seemed a danger to anyone else but rather because I was not sure that whatever planet she was on was entirely friendly to her own life and limb. In the end, I did not call.

Why is it -- if it is -- that people's private lives are so much more interesting than their public personas? Hours and hours and hours of effort and shaping go into what is acceptable or socially adroit or offers an entree into this group or that ... and all the while there is a private panorama kept carefully hidden at the back of some mental sock drawer. It's not necessarily violent or mean, though it may be that, but it's there, like unused butterfly wings -- a contradiction, perhaps, of all that is socially or personally acceptable ... wearing a turquoise hat in the darkness.

Maybe the question that I like to ask secretly of others is this: Of what privacy is your public display an example? I suppose I might equally ask it of myself, but it's safer to ask it of others. Who knows what the hell is at the back of my sock drawer?

Maybe one day the woman in the turquoise hat will take her wings off and fly.