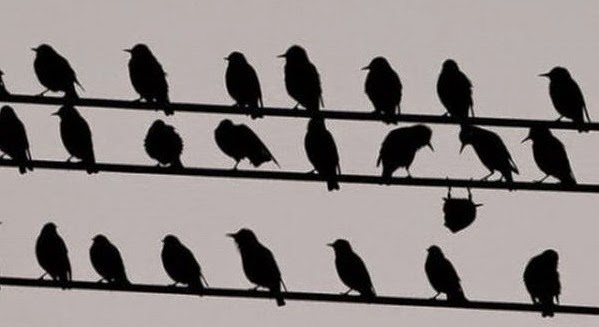 Elsewhere, the topic came up and I realized that I took it pretty seriously -- the implicit or explicit use of the phrase, "the chosen," to designate a group or group-think. It's rattling around in my mind like a bunch of bingo balls so ... here are some, however disjointed, thoughts.

First of all, I see nothing unusual or necessarily harmful about choosing companions with whom to consort. For friendship, for protection, for procreation, for singing, for spiritual adventure, for ... whatever. In each venue, whether social or mental, there is comfort and support and occasional rough patches. Give or take a little, this can be summed up in "man is a social animal."

Second, individuals run into the delight or horror of seeing themselves as "unique." There simply is no other snowflake that is precisely like "me." This understanding may flicker around the corner or flash full-bore into the eye, but it's there, in one way or another -- beckoning, goading, inspiring both delight and distress. One of the ways of  describing this uniqueness might be, "Your life is so difficult that it has never been tried before." Another might be, "No one gives a shit." "Unique" means alone. Companionship means not-alone ... at least on the surface. In one sense, "unique" is special. In another, it is lonely.

Third, all sorts of groups or mental configurations reach out for reassurance in the implicit or explicit use of the term "the chosen." Christians, Jews, Nazis, communists, Buddhists, wealthy people or poor, adults or children ... the list goes on and on, offering reassurance and elevation and comfort. If you want to write a sure-fire best seller, just write another one about what happens when the other-worldly shit hits the fan: "the chosen" catch a break; those who are not chosen get fucked. And the same stuff goes on in the mind.

Fourth, it is a very small step in the mind to move from recognizing uniqueness to gathering with companions who likewise recognize uniqueness and from there to posit a "chosen" status.

But I am running out of energy and interest here. The point I am after is this: There is nothing wrong with imagining some "chosen" status as long as it is accompanied by or preceded by a recognition and responsibility for who is making the choice. Creating an overarching source that does the choosing is comforting, perhaps, but it is a recipe for a life of doubt and underlying sorrow. The group or god or central authority or airy-fairy whatever-it-is can dull the fears of uniqueness, but it simply cannot extinguish the fact that you choose or I do and until there is some peace in this realm, there is no way of attaining peace. First, I choose; later I can diddle around with "who am I?"

Written down, this all sounds impossibly difficult or boring or whatever. But I think it is necessary on the one hand and impossibly simple on the other. I choose ... now what. How difficult could blue sky possibly be? Abdicating responsibility may be pleasant, but for how long and how reliably? The advantage of addressing the issue is that choice is a matter of verifiable fact whereas trying to obscure or override that fact is endlessly unsuccessful and not very happy-making.

Is it worth it?

I choose to think not.