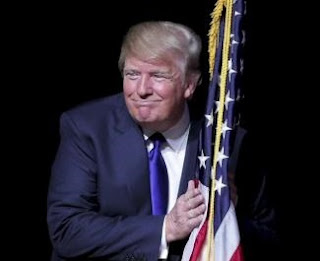 It seems that we can stop pussy-footing: Donald Trump, the American billionaire, is the Republican nominee who will run for president in 2016. His last, dribbling rivals -- a go-to-hell Christian named Ted Cruz and a more staid, white-bread John Kasich of Ohio -- dropped out after Trump's victory in the Indiana primary on Tuesday. He will run against Hillary Clinton, a Democrat who cannot seem to arouse an enthusiasm that would qualify as much more than a "soft-off."

Trump, a man who neither projects nor promises a dignity his constituency deserves, has tapped into a simmering anger and confusion in the electorate. He touches emotions and champions their wrath, but shapes no credible path forward outside of critiquing the parlous state of affairs ... a gridlocked Congress, an influx of immigrants, a sell-off of American jobs, a smarmy liberalism full of un-Christian devotees ... all of whom have screwed a pooch that has been beaten down and left behind. Well, go fuck yourselves!

In one sense, Donald Trump is a wonderful result of the kind of block-the-nigger Republicanism projected over the last several years. The Republicans are getting what they deserve. But in another sense, his stirring of the emotional pot points out how badly others -- not just Republicans -- are confused and angry and sick of being taken advantage of. Banks and insurance companies and stock brokers make the money that others have sweat for.

The election of 2016 is coming and it's largely about emotion. About the only one suggesting a way forward is Bernie Sanders, the liberal/socialist/Democrat whose popularity keeps stunning Hillary Clintion. Jobs, decency, equality in apportioned justice ... is Bernie spreading fairy dust? Sure he is, but at least it has a ring of something from which Americans with families or those in need of education might benefit from. It may be emotional claptrap -- the presidency is only one branch of government -- but it outflanks a drum-beat of anger and confusion and cusswords and religion.

Bernie and Donald -- the emotional duet of 2016. Trump's touchstone, "Make America Great Again," really does tell it (though accidentally) all: The greatness of America is on the wane. It's just a fact, but if there's one thing emotion doesn't give much of a shit about, it's facts. Trump says, "You're getting fucked." Bernie says, "You're getting fucked ... so stop bending over, already!"

It's all pretty tiring.

Or anyway, it tires me out.