a million insects ... and love 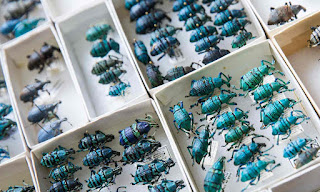 In two rooms of Charles and Lois O’Briens’ modest home in Tucson, Arizona, more than a million insects – a collection worth an estimated $10m – rest in tombs of glass and homemade shelving. They come from every continent and corner of the world, gathered over almost six decades; a bug story that began as a love story.

With guys like Donald Trump in ascendancy, it is nice to read about someone who loves what they do and are capable when doing it.
Posted by genkaku at 6:55 AM