who knows what symbols can inspire? 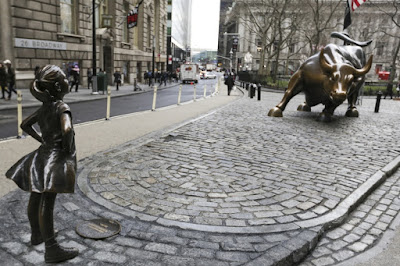 NEW YORK (AP) -- The globally popular statue of a young girl will keep staring down Wall Street's famed "Charging Bull" through February 2018 instead of being removed this coming Sunday, the mayor said.
She's "standing up to fear, standing up to power, being able to find in yourself the strength to do what's right," said Democratic Mayor Bill de Blasio, who appeared with the "Fearless Girl" statue Monday on the lower Manhattan traffic island where the two bronze figures face each other.