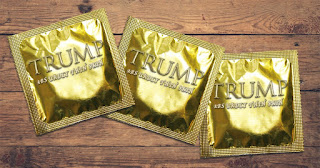 Passed along in email ... a bit dated, but still:

NEW YORK — U.S. President-elect Donald J. Trump held a press conference this morning to announce the manufacture of Trump Condoms, his latest namesake business venture, which will feature a gold foil-wrapped contraceptive touted as having the thinnest skin ever to hit the market.
“These condoms are really something, really terrific,” the incoming 45th President told reporters. “The slightest touch, be it real or imagined, will create a sensation that goes way beyond what mainstream condom companies would call ‘appropriate,’ folks, and I mean that — big league.”