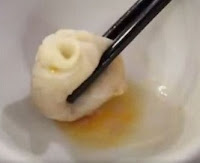 Woe to the uncouth, unkool, and uncultured West! Xiao Long Bao or soup dumplings do emphatically not belong in the hands of shallow millennials looking for the next cool trend.


Asian food lovers are fuming over a video they say "manhandles" traditional soup dumplings.
The video published by Time Out London on Facebook shows diners attempting to burst their Xiao Long Bao (little basket buns), and throw out the soup.

You can almost feel the outrage from those who have long held something sacred.

On the other hand, if no one had ever pronounced anything "sacred," would there be any frictions between those who claim to know the sacred and those knuckleheads who 'clearly' don't?
Posted by genkaku at 7:20 AM