Uighurs' plight hints at perilous reality in the West 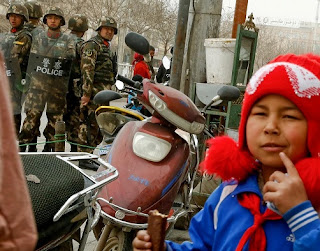 If you want some clue as to where the various 'democracies' of the world are headed, I have a hunch that a good place to look is in China's oh-so-concerned regulations among its minority Uighur population. One very small shard in the patchwork of 'security:'


Hotan authorities offer 2,000 yuan ($290) rewards for those who report "face coverings and robes, youth with long beards, or other popular religious customs that have been radicalised", as part of a wider incentive system that rewards actionable intelligence on imminent attacks.

Safety from terrorists is of course the mantram. But, as usual, the question whispers behind every regulation that guarantees a greater safety: Who is the terrorist and who is safer ... and from what?

The West may snigger at China's somewhat ham-handed application of restrictions, but I would suggest that the West look closely in its own mirrors ... its Fisa court, its militarization of police departments, its increase (in the case of the U.S.) in military spending, etc.

Ah, the compliant niggers, each with an American-flag lapel pin ....
Posted by genkaku at 7:41 AM