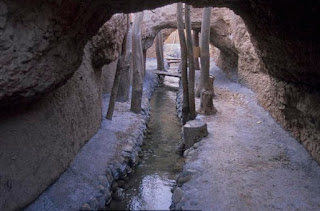 At its peak in 1784, the karez spanned 5,272km, with 1,237km running through the basin. The water flowed directly to the farms and vineyards, while residents drew cool, crisp drinking water from one of 172,367 wells....
Although not as widely known as the Great Wall, the karez is one of China’s most recognized ancient engineering feats. Constructed by the Uyghur people who long ago settled this remote part of northwest China, the system once carried water throughout all of what is now the Xinjiang Uyghur Autonomous Region.
Powered only by gravity, the irrigation method carries glacial groundwater to the Turpan Basin from the eastern base of the Tianshan Mountains. To avoid evaporation in the burning summer sun, the water streams through a maze of underground tunnels that connect more than one thousand wells across the area. Each individual tunnel stretches anywhere from three to 30km.

The Persians may have served as the engineering font for this man-made marvel, but in my mind, a marvel is a marvel, especially when it nourishes. 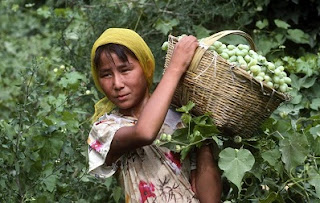