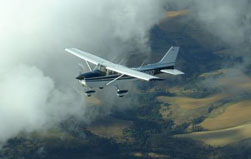 On the BBC news wire today, a critic bemoans the cowardice of imagination that he sees as infusing the money-making reinvention of "Beauty and the Beast." It seems to be a fad -- re-crafting lovely fairy tales and wringing out a few more shekels based on a proven winner. Said the critic, “If it ain’t broke, don’t remake it.”

As if to underscore the point, another BBC article reviews the successful 60-year history of the Cessna 172, a small plane whose functionality simply defies any but the most minor of tweaks. Reading both articles makes me want to twist the nose of all the wily 'entrepreneurs' whose capacities are limited to the Donald Trump style of imagination -- it's what it costs that determines the value.

Imagine that -- something works and keeps on working no matter what color you paint it.

OK, the Academy Awards and all the bogus hooplah are now behind us and perhaps the great unwashed like me can consider seeing what others circle-jerk into 'greatness' that is suspect to say the least. Who knows -- maybe an Academy Award winner is actually a pretty good movie ... though based on past performance, I doubt it. Mediocrity and political correctness are not why I want to see a movie. OK, OK ... the transgender, physically challenged, minority players are being injected and praised and in some cases are pretty interesting.

But is the story any goddamned good?
Posted by genkaku at 7:43 AM