across the great divide

Once upon a time, in the long ago and faraway, I was having dinner with Susan, a coworker at the publishing house in New York where we both made a living. Susan came from England, was Oxford- and Cambridge-educated and had wispy dreams of becoming Great Britain's first female prime minister before Margaret Thatcher beat her to the punch.

Susan was smart as a straight razor and I enjoyed her company from a position of one who was perfectly willing to grant her intellectual superiority. Susan was smart enough not to be mean and so we chatted amiably over dinner. 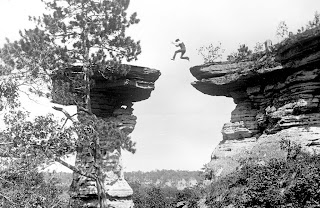 And at one point, probably about three-drinks into the evening, she said approximately, "The trouble with American education is that it doesn't teach rhetoric. The ability to argue a case is not very strong. For example, I could sit here right now and prove to you that a chocolate milk shake was vanilla."

I raised my hands in half-mocking-half-serious surrender: "Please don't do that!" I pleaded. I had no doubt she could do precisely what she promised and really had no interest in souring a perfectly pleasant meal.

Smart, smarter, smartest ... intellectual capacity is interesting, whether or not anyone wants to be prime minister of England. The English writer Aldous Huxley once wrote approximately, "If the intellectual travels long enough and far enough, he will return to the same point from which the non-intellectual has never started." And to the extent that that observation is true, I imagine it is true for anyone, with or without a sparkly education: Travel long enough and far enough on any path, in any endeavor, and eventually there is an inescapable need to acknowledge that, well, you got it wrong and you need to begin all over again if you want to get things straight.

A chocolate milkshake is vanilla ... smarter and smarter and smarter until you fly up your own asshole and disappear ... until the inescapable question asserts itself: "Who gives and shit? What practical usefulness do all these savvy pirouettes have? If I'm so smart (from trading stocks to plowing snow to selling shoe polish to adding another academic degree), how come I'm not happy?"

When I was a house painter in New York, I once went to estimate a job at a young woman's apartment. She was a ballet dancer, a very dedicated and disciplined one. We chatted about the painting she wanted done, but then, bit by bit, it became clear that she was not concerned with anything other than her life-consuming interest in and devotion to ballet. She simply could not talk about painting without injecting the overarching concern of her life. If this sounds weird, well, perhaps it sounds that way because that's what it was ... weird.

Disciplined accretion of expertise -- mental or physical -- begins as a separation. In order to do one thing well, there is a necessary separation from other possibilities. No one can practice meditation, for example, and go to the movies at the same time. So, as a means of gaining skill and understanding, one exercise is chosen and others are, ipso facto, set aside. There is no other choice.

But as a disciplined effort progresses and as familiarity and expertise grows, there is often a simultaneous growth in the crediting of the ipso-facto separations: A chocolate milkshake is not vanilla; a Buddhist is not a Christian; a lawyer is not a social worker; a smart person is not a dumb one.

And it is in the separations that the sense of unsatisfactoriness is nourished. A true understanding of expertise in any field is not a matter of separating things. But more, it is not a credible platform from which to assert some smarmy 'oneness.' Each person has an area of expertise and it is up to him or her to follow it -- bumps and all -- to the further shore. As the Zen teacher Shunryu Suzuki once said when asked if Zen Buddhist practice were important, "It's important, but it's not that important."

Self-helpers are fond of saying, "Follow your bliss." It's a phrase I find a bit icky, but perhaps it is close enough for folk singing: Hammer and tongs -- love what is loved and practice as if there were no tomorrow. But don't stop short ... don't imagine that this is somehow better or different or worse or the same. Keep going. Separation ... OK, live the dream. Oneness ... OK, live the dream. Keep going until the dream reveals itself ...

It's just another dream, isn't it?

Drink your chocolate milkshake.
Posted by genkaku at 9:03 AM