"It seemed like a good idea at the time"

I don't generally like using other people's efforts as a springboard for my own, but when someone gives me a laugh, rueful or otherwise, I feel truly indebted and tend to overlook my distaste for surreptitiously raising my own stock by citing or relying on someone else ... "Look Ma! I can quote the Tripitaka! I must be pretty wise, right? C'mon, adore my point of view, love me and kiss my ring!"

But last night, I was reading Brad Warner's blog entry, "I Am Not A Zen Buddhist ... OK. I Am." Generally, I admired the willingness to air out a topic that 'serious' Zen students are wont to keep under carefully-constructed wraps: Who knows what well-built institutions and self-worth might collapse if everyone ran around questioning the bedrock of a years-long effort? I didn't see Brad's words as some teen-aged anti-institutional rant, but rather as a musing in which the author was trying out a point of view, poking it like a baked potato, assessing whether it was done.

And in the second paragraph I came to this:


This is pretty much the same way as I feel. Only I did something that Alan Watts was intelligent enough not to do. I got ordained a Zen Buddhist monk. So I guess I actually am a Zen Buddhist now. What can I say? It seemed like a good idea at the time. 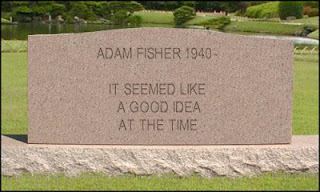 And that's where I laughed out loud ...

"It seemed like a good idea at the time."

And it may have been a very good idea, one that brought richness and peace and relief and any number of positive results. But also ... also ... also, for anyone possessed of an adult set of teeth, what was a good idea then seems to spread its wings in the now, soaring into unimagined results and repercussions ... some of them pretty wondrous, some pretty awful, some exciting, some boring as stale bread.

None of this is meant to inject or instill a snooty, above-it-all skepticism into the delight and determination and excitement and pedal-to-the-metal effort that can arise with good ideas. Regret later is no reason to withhold willingness now. But simultaneously, I see no reason not to observe what actually has happened to what once were good ideas ... or once were bad ideas either.

I just think it's a hell of a good line: "It seemed like a good idea at the time."
Posted by genkaku at 9:00 AM