Today is Pope Benedict XVI's last day on the job and, in parting remarks to the cardinals who will anoint his successor, he promised "unconditional reverence and obedience" to the new pope. Benedict is 85 years old. 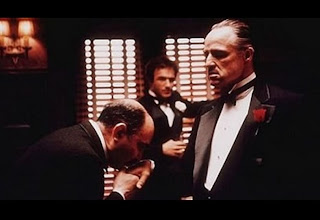 In the past, knights and warriors far and wide swore their allegiance to the king or noble who was acknowledged as the leader. And the same is true in spiritual endeavor -- allegiance to a person or belief that is at once greater and more capable of protecting the one who swears allegiance.

Safety. Guidance. Warmth. Love ... aren't these some of the elements that inform a willingness to offer fealty and loyalty? In a literal, save-your-ass sense and in a mental, peace-of-mind sense, loyalty and fealty provide social and sociable and protective landmarks. Loyalty and fealty demand a reined-in sense of completeness but the payoff is safety in numbers.

Like a good parent, the good guide shows the way. His or her wisdom is worth plumbing and emulating in a world teeming with dangers.

But what good parent or good leader would hope that those who once offered fealty and loyalty would do so forever ... that they would remain at home, relying on the safety and wisdom of another? How, in such a scenario, would it be possible for leaders to evolve? Doesn't there come a point where loyalty and fealty must be left behind, not as a matter of snooty unkindness, but in recognition that loyalty and fealty only reach so far.

No one who is honest disparages their times of loyalty and fealty -- even when they were misplaced. Loyalty and fealty are the testing grounds, the proving grounds, the foundations of experience. But neither does anyone who is honest escape the inescapable import of such experience: "Be a lamp unto yourselves." Safety in numbers, relief from the lash, escape from dangers ... these are matters to assess and ingest, but not to rely on.

I'm not pretending I can know Benedict's or anyone else's motives or meanings ... but the thought crossed my mind. Loyalty and fealty are boon companions ... and it behooves boon companions to reach a parting of the ways.
Posted by genkaku at 9:22 AM