During eight weeks of basic training in the army, there was a period of five or six days of bivouac -- living in a two-man tent by night and doing field exercises by day. There were no showers and by the end of the bivouac period, everyone was filthy. I stood in the shower for a good half an hour when we returned to the barracks ... a half an hour that included washing my entire body at least three times with scouring powder ... simple soap was not enough for how dirty I felt.

Bivouac was not something I was ever forced to endure again ... or at least not in the army. Still, other situations have come along in life that felt very much the same -- situations that required a willingness to get down-and-dirty because an unwillingness to get dirty meant there was simply no chance to be honestly clean.

That doesn't mean I like getting dirty. It's sticky, itching, slimy and I really don't like it. But the only thing worse than getting dirty is the unwillingness to get dirty. An honest spiritual life is precisely as former President Harry S. Truman described politics: "If you can't stand the heat, get out of the kitchen." 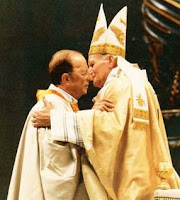 I thought of all this because a friend sent along a news article about newly-released Catholic Church papers that painted a yet-again disgusting picture of an institution that worked and works very hard to lay claim to cleanliness. Sexual and financial shenanigans and raw abuse were put on display in the story. The particulars of the story were new to me, but the gritchy format was not.

Same ol' same ol'. Do I really need to read or heed or purvey this shit again? Do I really need to pass the grime along, let alone dip myself in the cesspool? (There are squeaky-clean and righteous people who will tell me that going on bivouac is my own damned fault ... that there is a way to be squeaky clean without ever becoming soiled. As far as I'm concerned, when it comes to spiritual life, they are cowards and can go fuck themselves. With age, my patience dwindles.)

But it all hangs in my mind like a pervasive case of body odor ... grey, smelly, freighted, gloomy. Isn't there some good news? And of course there is good news, the kind of good news you get from people who never went on bivouac, the people who will tell you over and over again how squeaky clean everything is, the people who will despair of those who take a look and then cry out for scouring soap.

And still, I hate it: Buddhism, Catholic Church, or any other institution or supposition that offers up good news and then seeks to obscure or bury the bad. If you can't stand the smell of shit, don't feed on filet mignon.

PS. A Reuters article points out that Pope Benedict XVI's plan to retire at the Vatican will insure his security ... and simultaneously offer immunity from any future pedophile-scandal accusations.

PPS. And, whoever the next pope turns out to be, it's nice to know that there are some trickle-down economics involved as a small tailor's shop prepares the sumptuous vestments for the next pontiff ... in small, medium and large.
Posted by genkaku at 9:24 AM