under the bell jar

It was a friend visiting from out of town a long time ago who somehow pointed out to me the insular nature of living in New York City. Not that he was critical: It was just that something he said set off a train of thought in a mind that was then in its late 20's. 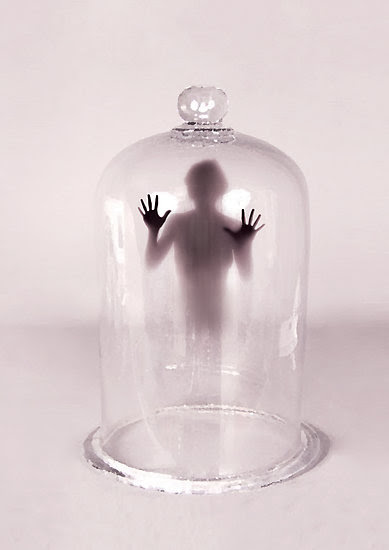 Like Alexis de Tocqueville's America, Manhattan was and is bounded on all sides by water and thereby enjoys, like the country as a whole, both wonderful protections and dreary, under-informed isolation. But of course the physical layout was not the most salient feature of New York's l'état-c'est-moi delight: Rather, it was something more wispy -- a sense that living under this particular bell jar was the only thing that a sane man might rightfully desire. The music, the museums, the money, the flair, the coursing blood of ideas and creativity and fun and fuck-ups ... what need was there to cross the river and enter the forests far from this bubblicious and complete existence?

My friend's suggestion and the thoughts that followed made me uncomfortable. I did not like to observe my own presumptuous narrowness. As a New Yorker, I was imbued with a kind of arrogance of sophistication ... like people who are well-off and, through no especial meanness, are incapable of knowing the rigors of not-having money: Their actions, though arrogant and painful to others, are often just a blindness that cannot be helped: Everyone owns a Bentley, drinks bottled water and eats snails, don't they?

I did not like seeing myself as a prisoner of my environment. How was I to be distinguished from some fulminating Bible-thumper whose ideas never stepped over the boundaries of the "good book" or a neo-Nazi zealot or some less pernicious, narrow-minded dolt?

It was in this questioning and discomforted frame of mind that I decided to check out the tourist attractions in the city I lived in. These were places I never went. They were part of my assumed environment, but they were as ho-hum as a toilet plunger next to the toilet. Out-of-towners might see the glory and wonder of New York in tourist attractions, but I did not. I decided to visit them as a way of winkling out the wondrousness of the environment I lived in but hardly paid attention to ... my own unexamined assumptions.

On weekends, then, I would pick an attraction and visit it -- the Empire State Building, the Statue of Liberty, a variety of 'great' museums. Somehow I imagined that if I could see the aspects of my wondrous world, I would capture and become commander of that wonder... and no longer be the citified rube limited by some fenced-in paddock.

Needless to say, my experiment was a flop, not least because I got hooked on the Circle Line, a boat that followed the waterways around Manhattan as the tourist guide droned on and on through a tourist-informing loudspeaker system. I loved being on the water. I loved the fresh -- or anyway more or less fresh -- air. There was some relaxing relief about being on a boat and being entirely at the mercy of that situation ... no if's and's or but's, there was no getting off the boat, no way to escape ... and my mind not only accepted that fact, it enjoyed it. No dithering ... this was this.

So my small weekend adventures wound to a forgetful close. Museums and monuments and other cultural events might be a description of the bell-jar wonders of my environment, but there was just no way to be any wider than I actually was ... to understand what life might be like across the literal or metaphorical rivers that surrounded me. Even traveling to those distant places, literally or mentally, could not do the trick. Photographs and tourist trinkets and historical understandings could not manage to revise the narrowness I suspected and could not escape.

And since I could not travel 'beyond' the edges of my bell jar, there really seemed to be only one course -- to investigate with care and attention the bell jar that held me as surely as the Circle Line boat once had.

Wonderful protection and dreary, under-informed isolation. The intellectual and emotional water that surrounded my island had no capacity to penetrate the wonder that was somehow beckoned and yet lay just out of reach. The consolations of my bell jar -- whether it was Manhattan or the mind -- were as disturbing as they were enfolding.

And I wanted 'out' of this trap.

As a means, I chose the bell jar of Zen Buddhism.

Whether it worked or not, I haven't got a clue.
Posted by genkaku at 9:15 AM