Yesterday, I was talking with a friend who was waxing crabby about the strictures of an Internet Zen Buddhist bulletin board he had just finished trying to disassociate himself with. The site, he argued, had fallen into what seems to be the invariable trap of such well-intentioned sites -- the increasingly precious limiting of who can post and under what conditions... sort of like a country club which invites all comers and then restricts them to various rooms. There are 'good reasons' for doing this: Just ask the creators of such strictures.

The conversation put me in mind of a couple of tongue-in-cheek appreciations of the past and I thought I would reprint them here, just for the fun of it.

First, my very own authentication certificate, courtesy of a forgotten friend in a forgotten time ... I saved it because you never know when someone is going to ask you to 'prove' you are actually as spiffy as you say you are: 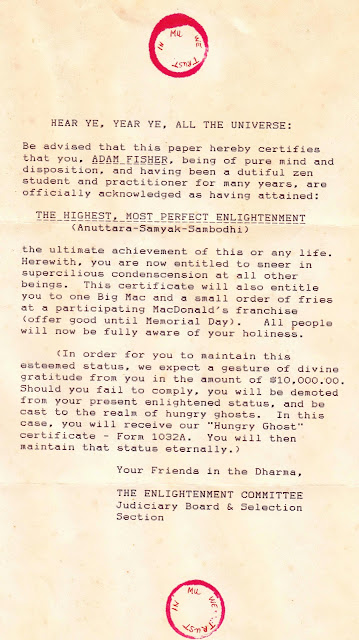 Second, my own posted-a-year-ago silly answer to the question, "Am I a Buddhist?"

Elsewhere on the Internet, someone asked how to know if s/he were a Buddhist. I recognize that this question can honestly mean something to some people, but I couldn't restrain myself....

Here are the ten incontrovertible qualifications for really being a real Buddhist really:

1. Adopt a wise and wizened demeanor -- someplace between George Clooney and Mahatma Gandhi.

2. Memorize the 108 holiest and most convoluted of all possible paradoxes. Dispense as necessary.

4. Walk slowly as if permeated with some weighty liquid.

7. If you visit a temple or monastery, make sure to bring home some small tourist treasure to indicate you visited. Hang it prominently, but with humble discretion, in your living room...next to all those books, perhaps.

8. Offer a small, carefully-crafted smile when someone tells you a first-class joke.

9. If someone asks you if you are a Buddhist, consider the question in a dour and somewhat quizzical silence.

10. Treat all beings with equanimity and kindness ... right up until the moment when you can't stand it any more and simply kick the cat. Repent as necessary.

And if all of this strikes you as utterly ludicrous, find a Buddhist practice, practice it and never mind who's a Buddhist and who's not.