Like some scowling thug, grey skies marked the dawn this morning. It is as if they were saying with lingering menace, "Don't even think of fucking with me!" 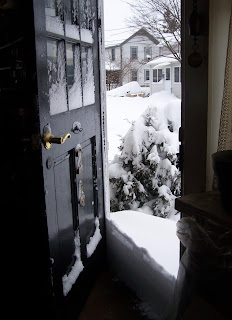 Last night's bustling winds have abated, the electricity is still working and windows up and down the street are half-lathered like some plastic Hallmark Christmas display. We got something like 12-14-16 inches of snow. Statewide in Massachusetts, driving is prohibited. Mail delivery in the six New England states is suspended.

The silence is damn near visible.

Next summer's water supply cloaks and impedes and beckons to weary shovelers like me.

The wind was bad enough last night so that I had to douse the wood stove's flames with water. The downside to a cozying, wood-burning warmth is the smoke that can be blown back down the chimney and into the house. This morning I could rebuild the fire.

Across the street yesterday, a Sears truck stopped outside Joe's house and remained for some time. Later, when I saw Joe, I suggested he bypass Sears repairs in the future: The company imposes charges that would do a Pentagon subcontractor proud. Instead, I told him about Dave, the guy who has fixed various appliances at my house -- an honest broker. Joe said the repairman had come to fix his snow blower -- a vast Cadillac of a machine that had blown a clutch after a single use: He bought it less than two months ago. A couple of thousand bucks, one use and something goes wrong.

Joe was upbeat: "It's still under warranty, so it didn't cost anything. And the timing (with the storm looming) couldn't be better." Still, he was happy to hear about Dave ... an honest broker is hard to find.

The accumulation of snow is both thug-fashion intimidating and simultaneously a happy harbinger. When natural discomforts come calling there seems to be a concomitant natural willingness to cut much of the crap of ordinary social intercourse and open up to friends, neighbors and even strangers. It's very pleasant, sort of like the unspoken secret handshakes that parents can share when talking about the kids ... offering up a rueful smile that says, "What a ballbuster! Oh well...."