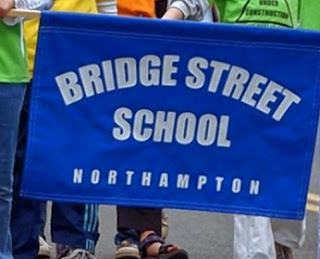 It being a full moon today, and full moons seeming to play a role in my occasional column-writing efforts on behalf of the local newspaper, the following appeared today after I dashed it off yesterday. An earlier column I submitted was deep-six-ed... even I didn't like it much. But my original agreement was to write a column a month and the moon seemed insistent yesterday. So.... I was surprised the editor moved so fast on it, but delighted that I got a chance to retell, old-fart-fashion, the egg story. The rest is a bit sloppy, but ...


Musings on the art of public school success

You can keep your "genius award." I don't want it. I got mine from Northampton's Bridge Street Elementary School a long time ago and have been content ever since.
The award was not announced on stage in front of an approving crowd. What actually happened was this.

At about the time one of my three children was cutting a path through the Bridge Street forest, I volunteered to be a teacher's aide. I did this partly for my kid (daddy cares) and partly because I thought there were too few men on the elementary school teaching roster. Call me a sexist if you like.

The job entailed showing up one day a week and taking orders from the teacher in charge. Mostly, if I recall correctly, I drifted from one table of students to another, making myself available to help.

On the day in question, students were assessing the similarities and differences between a hard-boiled and an uncooked egg. Students had to write their scientific observations in a notebook that each kept near at hand. Weight, color and whatever other empirical data they gathered. In the end, each egg was cracked open and it was here that the trouble and my glory arose.

A large number of students did not know how to spell the word "yolk." I saw this again and again and again -- "y-o-k-e" made a lot more sense -- until finally I arrived at a solution.

Standing up from the table, I pointed to one little girl and beckoned her to come with me into a corner of the classroom. I leaned down by her ear. "Can you keep a secret?" I asked her as seriously as I could.

Her eyes widened with excitement as she nodded her head and she agreed.

Slowly and clearly, I whispered to her ... the correct spelling of the word "yolk."

Then I reiterated the ground rules: This was a secret. She couldn't tell anyone else. Once more she agreed.

The following week, when I returned for my next stint as an aide, the teacher told me that "not only can the whole class spell "yolk," the whole school can spell it."

But spelling is a small, if important, matter. There are thornier school issues, as, for example, the matter of bright students who go unchallenged.

"Did you ever notice," I once remarked to former Principal Johanna McKenna, "that school systems and their supporters have no apparent difficulty in identifying which students are ‘challenged?’ And they seem to have no difficulty identifying who might be ‘mainstream.’ But let one voice be raised on behalf of ‘gifted’ students and the whole world collapses into political chaos."

Anyone who has been to school knows there are the "smart" kids and asking them to meet the standards laid out for the less-smart is like asking a bike rider to put training wheels back on his or her bike.

But what other choice is there? Public education is "public," which is to say it is for one and all. Public education is one of America's proudest moments, although it is being slowly sold out to charter schools" Shall each and every class be dumbed down from the level at which the "smart" kids are? Shall each class be raised beyond the level at which the "mainstream" operates? And what about the "challenged?"

When it comes to education, two things are worth keeping in mind: Education is vastly important (TED talkers of the world, unite!) right up to the moment when someone writes the checks. And "gifted" kids do indeed deserve a greater challenge ... as long as you acknowledge that my kid is gifted.

In a March 21 letter to the Gazette, a woman urged parents to rise up and demand a greater voice in setting the "appropriate challenge" for bright students in schools. "Meeting the mandate," she suggested, is just plain not good enough. Between the lines of her letter, if I am not mistaken, is the broad implication that dumbing things down is no way to raise up young minds.

I couldn't agree more. But where the rubber hits the road, I am not self-important enough to imagine I could iron out the wrinkles in the challenged-mainstream-gifted tapestry with the same ease I won my genius award so many years ago.

But that's not to say I won't applaud those who give it a shot.

Adam Fisher lives in Northampton. His column appears on the third Wednesday of the month. He can be reached at genkakukigen@aol.com.