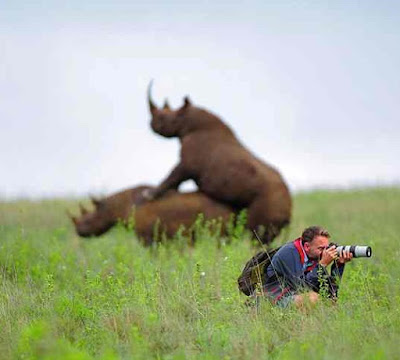 Photographer Greg Armfeld came in for a raft of often-snarky criticism after a photo surfaced showing him taking pictures of something other than the black rhinos he had set out to immortalize in Kenya. It seemed like a picture-perfect oops moment.

The trouble is, according to Armfeld, no one really did their homework. To hear him tell it, he had already shot a lot of pictures of the black rhinoceroses mating before he turned his camera elsewhere.

Black rhinos are not, apparently, known for premature ejaculation.  And not only are they in no rush to wrap up their sexual liaisons, they also are not known to practice the various imaginative and photogenic positions recommended by the Kama Sutra.

Bottom line: However rare catching black rhinos in the act of mating may be, still, after 45 minutes and the first hundred or so pictures, it gets pretty boring.

Sounds to me like a perfect moment in which to move on.
Posted by genkaku at 6:08 PM