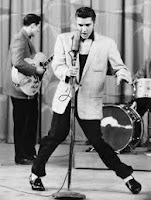 Right up until the moment when forgetfulness just seeps in like Mississippi flood waters under the door to the living room.

It's too big, too important, too visceral. No one could forget that ... right?


LAS VEGAS (AP) -- For decades, Las Vegas has loved Elvis Presley tender - and loved him true - but the King's presence in modern day Sin City has lately been diminishing, one impersonator at a time....

These days, Elvis registers only briefly in the consciousness of Melanie Casas, 22, of Phoenix. On her first trip to Las Vegas recently, she identified him as the singer of "Hound Dog" who was also featured as a character in the "Forrest Gump" movie.
"I know of him but I don't know anything about him," Casas said, shrugging.