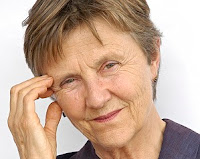 An Australian author says she "fell off her chair" when she discovered an email about a $150,000 (A$207,000; £106,000) literary award was not a hoax.
Helen Garner initially dismissed the message from Yale University as a hoax.
"I thought what the hell is this? Somebody's having me on," Ms Garner told the Australian Broadcasting Corp.
She was going to delete the email but thought to call her publisher, who informed her that the Windham-Campbell prize was in fact real....
She was not the only author to be taken aback by the surprise award, because the prizes have no submission process. "Writers are judged anonymously and unaware that they are in the running," Yale says on its website.

A dream come true: Something -- and something yummy and unexpected -- happens as a result of doing something you had entirely other aims with. The sage and the serene stroke their beards and declaim smugly, "the law of unintended consequences." It is as if, by using that label, the unexpected could somehow be placed in thrall. And that's not to mention the lazy chatter boxes' saying things like, "everything happens for a reason." Or the lookit-me-Ma recitation of "the butterfly effect."

Nevertheless, despite all the control freaks, it does make you wonder about all the unintended consequences, whether yummy or not, that occur all the time without any notice or accolade at all. Spit on the sidewalk and the Great Wall of China gains or loses some ineffable grandeur.... that sort of thing.
Posted by genkaku at 9:41 AM