bringing a knife to a gun fight 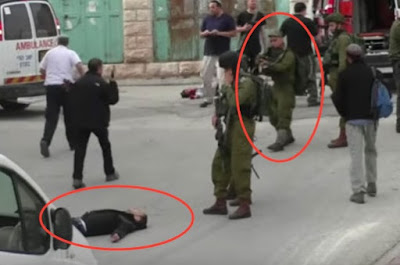 Among the increasing number of things I suspect but no longer have the get-up-and-git energy to track down and document....

An Israeli soldier has been detained after a video emerged showing him apparently shooting a Palestinian in the head as he lay wounded and motionless on the ground.
The Palestinian was soon declared dead. He was one of two attackers who had earlier stabbed another Israeli soldier in the West Bank city of Hebron.
The Israeli military said the shooting was a "grave breach of IDF (Israel Defense Forces) values".

Like a guttering camp fire, these incidents crop up from time to time, though they seldom seem to be captured on video: An apparently-enraged Palestinian attacks Israeli police or military forces with a knife. The Israeli police or soldiers shoot him or her to death.

The old adage springs to mind, "Don't bring a knife to a gun fight."

And as such Israel-Palestinian incidents pop up -- usually spliced between more weighty bits of news -- it makes you wonder: Are the Palestinians who A. attack and B. are shot dead purely stupid ... bringing a knife to what is likely to be a gun fight or are they perhaps desperate?

With all the guns the U.S. peddles in the Middle East, you'd think the Palestinians might get their hands on something more lethal. But no -- the stories always have the Palestinians waving knives and the beleaguered Israelis defending themselves against the onslaught: Conclusion -- the Israelis are under incredible pressure and, implicitly, using restraint in the face of Palestinian insanity. Shooting such deranged and dangerous people makes sense ... but it's amazing how many of the Palestinians die and it's amazing how infrequent are any references to a taser or less lethal defense. Hell, even American cops have the good grace to try -- or say they tried -- some lesser defensive maneuver.

In the story cited, the one videotaped, the Israeli military said the act was a "grave breach of IDF (Israeli Defense Forces) values." My suspicion, the one I haven't the energy to search out and collate, is that far from being a breach, the fatal shooting was entirely in line with IDF values. From the Benjamin Netanyahu point of view, Palestinians are simply the uppity niggers of the Middle East ... deserving every bullet that brings them down.

Surely Netanyahu, like Donald Trump, is entitled to his opinion and his willingness to elevate and cement his political stature, but does that mean the American media should implicitly or explicitly condone these itsy-bitsy stories in which it's OK to shoot dead a man or woman who brings a knife to a gunfight? Is this justice? Does the U.S. wish to be party to such fatuous propaganda?

As I say, I haven't got the wherewithal to research these incidents -- to collate and place them in a single basket. I have no way of knowing precisely how dangerous the incidents were on the ground. Like a shark, I only suspect that there is blood in these waters: A military man, fully armed, cannot find and alternative to shooting? What sort of training or policy is that? Any killing is a tragedy, but the balance of force is out of whack.

In March 2015, Netanyahu addressed a joint session of Congress for some 40 minutes. The topic was the U.S. initiative to reduce its sanctions on Iran, Israel's sworn enemy. I wonder how many American politicians had the nerve not to show up. I wonder how many asked for a similar address from one of Iran's spokesmen.

I wonder and suspect ... the kind of blog nonsense that is increasingly seen as a legitimate way to address a situation. Oh well.... Maybe someone else will have the researching energy and let me know how full of shit I am ... again.
Posted by genkaku at 8:27 AM