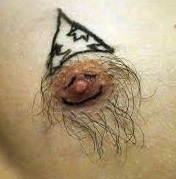 Back in the shadowed corners of history, when I grew up, television was frequently referred to as "the boob tube," a reference to the boobs or idiots who might stayed glued to it. Now, of course, things have moved on.

But now, Facebook, one of my least favorite purveyors of cultural claptrap, has seen fit to distinguish between acceptable and unacceptable display of women's nipples. Kim Kardashian's boobs get a bye -- please notice I did not indulge my desire to say anything about a boob with boobs -- but the breasts of aboriginal women seem to be over-the-top in Facebook's catechism and have inspired a recent ban or two.

Everyone is so damned 'grown up' in the world of decency that they remind me of the old joke about the bird flying in diminishing circles around a mountain top ... tighter and tighter circles until finally the bird flies up its own ass and disappears. If we all moved to Kentucky, would we really be better off or our randy bits any less randy?

Somehow it seems ludicrous to me to see lovers in bed together on TV dramas ... waking up after a night of frolic ... and she's wearing a bra?????? And it's a short step from there to wonder why, a little at a time, an audience may see a guy's bare ass on a boob tube melodrama, but never gets a good honest look at his tallywacker. Maybe if it had a nipple, there would be a better chance for display and yippee-indecency.

Frankly, I find it more enticing to look at a woman who is dressed instead of flaunting a low-cut evening gown. Naked is just naked. Dressed means imagining how delightful it might be to un-dress.