in the watery crosshairs 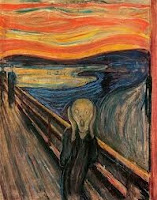 It is enough to leave Edvard Munch's "The Scream" in the shadows.


The engineers warned that potential loss of life from a sudden catastrophic collapse of the Mosul dam could be even greater than the 500,000 officially estimated, as they said many people could die in the resulting mass panic, with a 20-metre-high flood wave hitting the city of Mosul and then rolling on down the Tigris valley through Tikrit and Samarra to Baghdad.

True, from the white man's unacknowledged aerie, it's just a bunch of brown people.

But the situation is like so many others elsewhere: If you're going to run around participating in yet another bloodbath -- one that is "right" and "true" and "virtuous" of course -- wouldn't it be nice to kill others in aid of gaining some worthwhile prize ... as for example a dam that worked and one that provided sustenance to those you hoped to enslave or liberate? Wouldn't it be smarter to fix the dam and then set about prosecuting a bloodbath? What's the point of winning when there's no longer anything left to win?