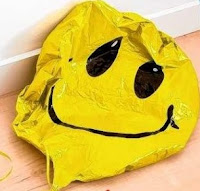 What a juicy, satisfying epithet: "Hypocrisy!"

Hypocrisy and the hypocrites who indulge in it require an axiomatic principle. This principle is then belied by the actions of the hypocrite. Roughly, hypocrites talk the talk but fail to walk the walk. How sleazy, right?

But this morning I have the sense that the juice and savor and delight and wind have dribbled and dripped away from "hypocrisy" and left it deflated and bereft like some suicidal whale on a Cape Cod beach.

The reason, as best I can guess, is that there is no longer an axiomatic principle against which to place these liars and pretenders. How can you cuss someone out when there is no agreement as to the preferred activity they may tout. If there is no principle in the first place, it's hard to excoriate the man or woman who does not observe it.

Take, for example, this small video passed along in email yesterday. Basically, it is a quick-and-dirty summation of the number-one slot the United States claims when it comes to worldwide arms sales.

None of it is especially surprising to a moderately well informed individual. Arms are a honey pot and the U.S. is a nonpareil bee. Arms provide jobs -- a touchstone for liberal politicians seeking to right the ship of income inequality. But they also stand in stark contrast to the "peace" that the mealy-mouthed may trumpet. A small segment of the clip alludes to the fact that Islamic State (the 'great Satan' that the West excoriates with regularity) has found a use for the M-16 rifles produced in, where else, America.

Given this scenario, it is hard not to conclude that the West promotes the war it claims to abhor. This is revolting and hypocritical right up to the moment that anyone realizes that the guiding principle of "peace" is not really a guiding principle. Instead it is an amorphous touchstone that shapeshifts according to its price tag.

I don't mean to play the ain't-it-awful guitar in all of this. Hypocrisy of this sort is demonstrable in a wide range of activities -- failing to state the principle and then adhering to it. If you have any doubts, just look at the world of spiritual endeavor ... full of peace and love and compassion and, when a closer examination turns over the rocks, a host of slimy and corrosive activity comes to life.

It's no biggie, perhaps. But the worst of hypocrisy is not so much the bitchslap that can be administered to others. It is the bitchslap that can deflate the decency and happiness of individuals forced to look in the bathroom mirror. I doubt that principles, whether political or personal, can ever be perfectly realized, but I do think that without the effort, life becomes a little grey-er and more painful.

Of all the good habits anyone might nourish, I guess I think most highly of attention and responsibility. These capacities come closest, as best I can see it, to a perfected principle that can never come true.

But being a little less the hypocrite beats putting a price take on everything and pretending that this hypocrisy is other than what it is.