I awake accompanied by the delicious crankiness of the word "twerp." I am sick of twerps, of the slow-but-sure devolution of my country into mediocracy, of the mindless elevation of sincerity that drowns out any principled nourishment. Bah! When was the last time my country could lay claim to a worthy advance or breakthrough? The health care plan was at least an attempt, but elsewhere it's a world full of greedy twerps, flag-wavers, war mongers and weenies.

As with all such criticisms, you can't see it if you can't be it. OK, I'm a potential twerp too. And still I am sick of twerps. It's grating and galling and, like some Tea Party mediocrat, I want to holler, "Go fuck yourself!" I'm oh-so-sincere, dontcha know.

"Twerp" is defined by an Internet dictionary as "a silly, insignificant, or contemptible person." This cut-and-dried definition fails to transmit the pure silliness and fun of the word "twerp" as it occurs in my mind. Twerps are small people -- small physically, small mentally ... small, as in the alleged size of Donald Trump's penis. They are silly, small idiots ... right up to the moment when the morning dawns and the twerps are running the show.

My elevated vantage point collapses in the face of the fact that self-righteous posturing has won the day and twerps rule. $12.37-an-hour-insurance-company clerks tell cardiac surgeons how long a patient can and, more important, cannot stay in the hospital in the wake of major surgery. What the rule book says is what those ruled must adhere to ... because these are the rules and without the rules, we would all be worse off. The fiction is extended: Rules can in fact rule and -- you'd better believe it -- improve life. This is, of course, true, right up to the moment when it becomes patently false and the age of mediocracy advances... and the movie "V for Vendetta" takes on a burning, pungent accuracy.

Twerps are like Potter Stewart's Supreme Court observation about pornography: "I may not know what it is, but I know it when I see it," he said in essence. 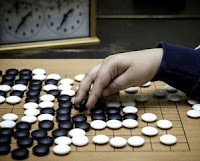 But in order not to be too badly tarred by my own twerp-prone brush, it really is necessary to point out what is not quite so twerp-y. What is it that would bank my fires ... gimme an example. And, of course, the minute I do, I run the very real risk of being branded a twerp by the sincere twerps who are building this mediocracy.

In Seoul, South Korea, Lee Se-dol, the world champion of Go/baduk, is scheduled to play a five-game tournament against Google's artificial intelligence program:


"I've been telling people that I was certain that I would be the winner of all five matches. But Google - which developed the programme - seems to be quite confident, too".
He is spooked by the idea that the computer can adapt its game as it learns its opponent's style - his mechanical opponent will adapt its style as it studies his.
This idea that a computer can learn how to ultimately beat a human has frightening possibilities if it were ever eventually translated into weapons, for example.

Consider the breadth and depth:


The number of permutations in a game of Go is greater than the number of atoms in the universe, according to the Nature science journal, "so it can't be solved by algorithms that search exhaustively for the best move"....

Playing against a machine is very different from an actual human opponent," the world's Number 1 told the BBC.

"Normally, you can sense your opponent's breathing, their energy. And lots of times you make decisions which are dependent on the physical reactions of the person you're playing against.
"With a machine, you can't do that."

Of course, it's just a game and any twerp can point out things that are more sincere and more compelling than games.

PS. And then there's the apparent excellence of the discovery of a way to promote regeneration of the cataract-afflicted eye. 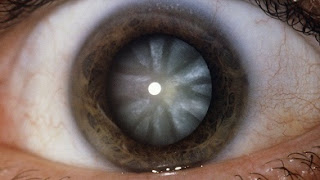